January 14, 2022. The Ukrainian World Congress (UWC) calls on Ukrainian communities and friends of Ukraine around the globe to join the #StandWithUkraine #StopPutinNOW campaign and show your support for the Ukrainian peoples’ right to live free and in peace on their own land.

On January 22, the Day of Unity of Ukraine, the Ukrainian World Congress is calling for a global rally to  #StandWithUkraine and #StopPutinNOW.

“Russia’s aggression is a serious threat to Ukraine’s sovereignty, which will undoubtedly set off a massive and bloody regional war not witnessed since WW2,” stated Paul Grod, Ukrainian World Congress President. “We call upon the international community to begin rolling out punishing sanctions against Russia and provide meaningful military and security support to Ukraine!”.

Since Russia’s attack on Ukraine began in 2014, over 14,000 people have been killed, tens of thousands seriously wounded and over 1.5 million displaced. In recent months, Russia has been amassing unprecedented forces along the border with Ukraine. Putin’s imperialistic ambitions are not limited to Russia’s neighborhood as he continues to start multiple regional conflicts and destabilize democracies around the world. 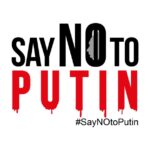