The Ukrainian World Congress calls upon the international community to stand united in the face of escalating Russian aggression against Ukraine and the whole European continent. We urge the international community to take resolute steps to deter the Kremlin’s further attempts to destabilize Europe, shatter the foundations of the EU, and cripple the Trans-Atlantic partnership.

The recent Russian massive military build-up at Ukraine’s borders, accompanied by the Russia-orchestrated migrant crisis in Belarus and staged gas crisis in Europe, is a well-planned purposeful hybrid destabilization campaign threatening security in the region.

“We welcome recent statements of support for Ukraine from our key partners. It is now time to act. The Ukrainian World Congress calls upon the international community to take concrete steps to deter Kremlin’s aggression. Putin’s Russia must be stopped. We must not appease a modern-day tyrant who threatens the rules-based international order,” stated Paul Grod, UWC President.

The Ukrainian World Congress calls on international partners of Ukraine to strengthen deterrence by:

On November 13, the UK announced that up to 600 of its troops are prepared to be deployed to Ukraine at a moment’s notice amid rising tensions and fears of a possible Russian invasion in the region. U.S. officials have also been raising the alarm with European Union allies that Russia is weighing a potential invasion of Ukraine. In his message to European countries on November 15, the British PM Boris Johnson stated, “We hope that our friends may recognize that a choice is shortly coming between mainlining ever more Russian hydrocarbons in giant new pipelines, and sticking up for Ukraine and championing the cause of peace and stability.”

Read a joint statement of France and Germany on Ukraine.

Read a statement of NATO Secretary-General Jens Stoltenberg regarding the situation on Ukraine’s border with Russia. 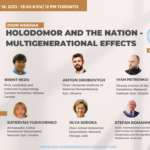 Holodomor and the Nation - Multigenerational Effects
All Posts 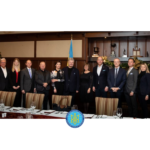