The Ministry of Culture and Informational Policy of Ukraine, The National Holodomor-Genocide Museum, The Ukrainian World Congress and The International Charitable Foundation of the Holodomor Museum signed a Memorandum of Partnership to create and develop phase two of The National Holodomor-Genocide Museum with the intention of fully opening the museum for visitors in November 2023, on the occasion of the 90th anniversary of the Holodomor.

The signing of the Memorandum enables the effective implementation of a public-private partnership aimed at consolidating the efforts of the state and civil society. Its aim is to restore and preserve national memory and generate public support of the modern Holodomor Museum Memorial Complex – not only at its formation but also its future , sustainable development.

According to the Memorandum, The Ministry of Culture and Informational Policy of Ukraine represents the public part of the partnership and provides for the Government’s support in the project implementation.

“The Holodomor is a tragic page in our history. It’s important that the world knows the truth about who’s guilty. For years the Soviet regime had been hiding this horrible reality, in which millions of people lived. Intentional genocide was enacted against the Ukrainian people and was hidden. The Museum complex will allow access to the true information about what was indeed happening at that time, without diminutions and pseudo-facts. Its construction is an extremely important step towards perpetuating the memory of all Ukrainians, as well as those who also suffered from the inhuman repressions in the USSR. History is not forgotten,” said Oleksandr Tkachenko, Minister for Culture and Informational Policy of Ukraine.

The National Museum of the Holodomor-Genocide is responsible for the content of the main exposition, which will be created in the building currently being constructed. A scientific concept is already created within the Museum. The Museum also provides the work of the Content Group, which includes Museum staff, as well as museologists, history experts and specialists in other related disciplines. An international Expert & Science Council has been established at the Museum.

According to the Memorandum, the Ukrainian World Congress is responsible for the international support to the Project of the creation and development of the Holodomor Museum.

“The Ukrainian World Congress is actively engaged in creating and developing the Holodomor Museum. For decades, we have been sharing the truth about the horrific crimes of Stalin’s regime with the world to ensure international recognition of the Holodomor as an act of genocide against the Ukrainian people. Attracting international support will contribute to the creation of a world-class museum and make it well known not only within Ukraine but also globally,“ stated Pavlo Grod, President of the Ukrainian World Congress.

The architectural design of the Museum building in the second phase of construction of the Holodomor Memorial Complex in Ukraine was developed by the Ukrainian firm “Project Systems Ltd.” in co-authorship with the Polish studio NizioDesignInternational. In 2017, at the stage of the draft, the project received a positive assessment from the advisory body of the UNESCO World Heritage Center. An international design consortium consisting of Nizio Design International (Poland) and Haley Sharpe Design (Great Britain) is working with Ukrainian scientists and specialists to create a design project for the main exposition of the Holodomor Museum.

International Charitable Foundation of the Holodomor Museum founded to promote the activities and development of the National Museum of the Holodomor-Genocide. Together with its partner, the Canada-Ukraine Foundation, the Foundation is responsible for conducting a fundraising campaign aimed at financially and informationally support implementation of the project in terms of creating and implementing the Museum’s main exhibition, arranging the interior area, and establishing an endowment fund for the Museum’s future sustainable development. The Foundation’s Supervisory Board consists of well-known personalities: the Heads of Ukrainian Churches, His Beatitude Sviatoslav (Shevchuk) and His Beatitude Epiphanius, Viktor Yushchenko, Filia Zhebrovska, Prime Minister of Canada Stephen Harper (2006-2015), Prime Minister of Australia Tony Abbott (2013-2015), public figures and business representatives to participate directly in the implementation of the statutory objectives of the Foundation and guarantee that the funds are used most efficiently.

Created in joint efforts and open to visitors in 2023, the Museum will tell not only the history of the crime of genocide of the Ukrainian nation – the 1932-1933 Holodomor, but also the strength and resilience of Ukrainians, dignity and long struggle for a single eternal desire – living in a sovereign successful Ukrainian state. The museum will disseminate knowledge that will be not only an antidote to any attempt to deny the crime of the Holodomor, neglect human rights and repeat the crimes of genocide in the future, but also a foundation for strengthening democracy in Ukraine. 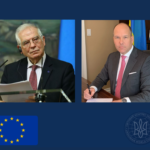 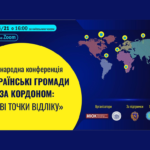