May 28, 2021 – Brussels. The Ukrainian World Congress is appealing to the Federal Government and to the Democratic Parties in Germany urging to impose an immediate moratorium on Nord Stream 2. The Russian natural gas pipeline, intended to bypass eastern Europe and directly connect in Germany, is scheduled to be completed this summer. It has faced significant European and international condemnation for being a political weapon of the Kremlin intended to use energy supply to control Ukraine and other Eastern European countries.

Specifically, a moratorium should be used to:

· clarify the strategic implications of Nord Stream 2 – particularly with respect to the security of Ukraine and of the EU’s eastern member states;

· undertake a detailed life cycle assessment of the project and have its climate impacts examined by an independent body;

· resolve the transatlantic differences relating to Nord Stream 2; and

· discuss principal issues of controversy between the EU and the Kremlin and reassess Nord Stream 2 in that light of this discussion.

The UWC is emphasizing that Nord Stream 2:

· conflicts with the new European and German climate goals;

· threatens the already precarious security of Ukraine; and

· runs counter to the aim of a common EU external energy policy.

The appeal, initiated by influential German think tank Zentrum Liberale Moderne, is being covered by prominent German and international media, and an advertisement in a major German daily newspaper is also planned. Like UWC, this think tank together with two other German organizations were recently banned by the Russian state prosecutor’s office.

Chancellor Angela Merkel has been informed personally about the appeal which brings together a large number of prominent figures from Europe and North America, including the former Estonian President Toomas Hendrik Ilves and the former Polish Prime Minister Jerzy Buzek, former ministers, high-ranking diplomats, and military, numerous MPs, well-known thought-leaders and representatives of civil society.

“A moratorium for Nord Stream 2 represents a chance to arrive at a common European position. It would deliver a clear message to Russia’s leadership that there are consequences for continuing violations of international law and for undermining the rules-based European order,” – emphasized Paul Grod, UWC President. “UWC calls on all Ukrainian and Eastern European communities together with all friends of Ukraine to join the appeal and urge their respective governments to support the moratorium on Nord Stream 2.”

Join the appeal in English and in German.

Congratulations to the AUP on a successful conference dedicated to their 30th anniversary October 13, 2021 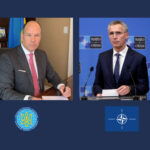