Ukrainian World Congress (UWC) First Vice President and Co-Chair of the Australian Federation of Ukrainian Organisations Stefan Romaniw reinforced the UWC position on recent developments in meetings with Ukrainian government officials and civil society leaders during a working visit to Kyiv in February, 2020.

Stefan Romaniw had the opportunity to meet with state officials of the Ministries of Foreign Affairs, Internal Affairs, and Culture, Youth and Sport, to reiterate the concerns of the UWC with respect to current events. The First Vice President emphasized the need to address the issues of politically motivated justice as well as  legislative initiatives on land reform, citizenship and media that could impact the continued development of democratic processes in Ukraine.

An update on phase two of the National Museum of the Holodomor-Genocide was provided in meetings of the Holodomor Victims’ Memorial Charitable Foundation of which UWC is a founding member.

The First Vice President participated in historic commemorations during the visit – the anniversary of the Battle of Kruty and the first anniversary of the enthronement of Metropolitan Epifaniy as Head of the Orthodox Church of Ukraine.

During Australia Day celebrations Stefan Romaniw shared with Ambassador of Australia to Ukraine Melissa O’Rourke the UWC’s gratitude for the continued support of Ukraine and its people.

“My visit to Kyiv was timely taking into account the development of current events that are potentially threatening to Ukraine’s continued democratic development and reform process. Keeping the lines of communication between the UWC, the Ukrainian government and civil society is critical to safeguarding the aspirations and rights of the Ukrainian people wherever they may reside” – noted Stefan Romaniw. 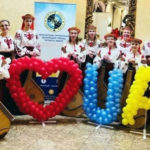