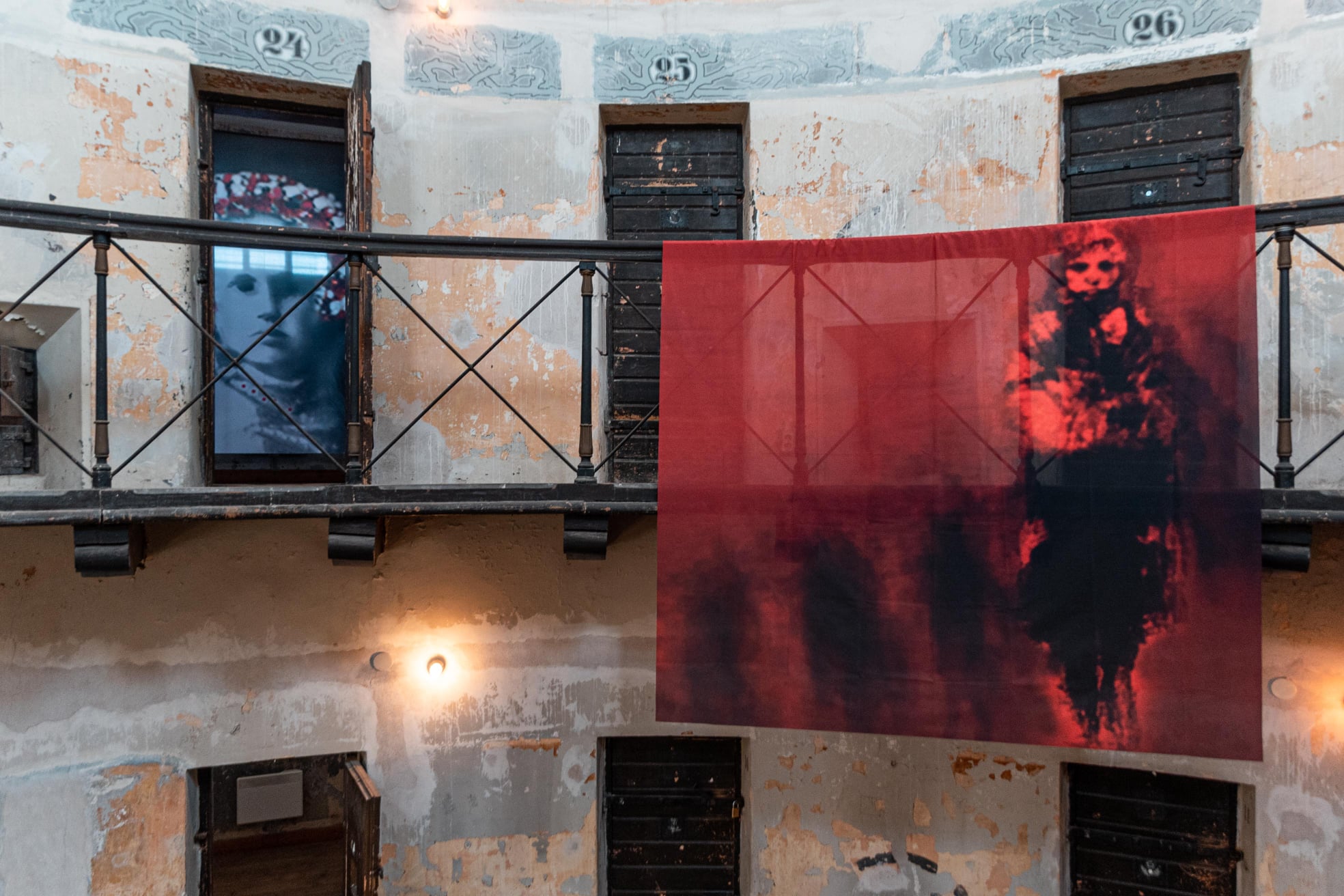 The seventh Landskrona Foto Festival in Landskrona, Sweden, running through September 20, includes among its more than twenty exhibitions Project MARIA – an art installation by Canadian photographer and artist of Ukrainian descent Lesia Maruschak that shares the story of the Holodomor through the eyes of a survivor.

“Produced across platforms including books, installations, textile sculptures, performance, lectures and film the project manifests my intellectual and emotional response, informed by current research and the survivors’ stories,” said Lesia Maruschak. “These accounts made such an impression that they are always with me as I explore my identity, but also as I share them with others. It is in sharing these stories that we explore universal experiences and find common ground. That is what my work is about.”

One of the images from Project MARIA is being featured as the main promotional image for the Landskrona Festival on digital billboards throughout the city centre.

“Lesia Maruschak’s project Maria is a reflection on the memory and trauma of the Holodomor. Maruschak’s starting point, a portrait of Maria F, a survivor who migrated to Canada, is a mixed media body of work using archival images which are digitally reinterpreted, resulting in a timeless visual narrative,” commented Landskrona 2020 Curator Monica Allende.

“Project Maria was selected as part of this year’s Landskrona Foto Festival programme responding to the theme of The Architecture of Memory, a reflection on the role of memory in the construction of reality as well as how the collective notion of social memory is influenced,” continues Allende. ”The exhibition is part of the chapter “ Conflicting History “ within the overall festival’s theme where four artists examine the consequences of persecution violence and ultimately genocide in authoritarian regimes. It is showing at the Citadel, a medieval fortress in the city centre which served both as a prison and refugee centre post-WWII until the 1940s aiming to create a direct dialogue with space.”

“The Ukrainian World Congress congratulates Lesia Maruschak on her accomplishments and the international recognition of her work, including Project MARIA,” commented UWC Vice President and Chair of the UWC International Holodomor Coordinating Committee Stefan Romaniw. “We also extend our appreciation to Landskrona Foto Festival and its artistic director, Monica Allende, for choosing to feature MARIA among its exhibits by so many distinguished photographers and thus helping to raise awareness of this genocide that today still remains relatively obscure in historical memory.”

Representatives of the Embassy of Ukraine in Sweden had the opportunity to view the exhibit and expressed gratitude for sharing the story of the Holodomor. “The “MARIA” project is an important contribution to spreading awareness of the Holodomor, the genocide of the Ukrainian nation in 1932-1933 which was committed by the leadership of the Soviet Union with the aim of making Ukrainians obedient and the ultimate elimination of Ukrainian opposition to the regime including efforts to build an independent from Moscow Ukrainian State, The Embassy of Ukraine in the Kingdom of Sweden extends its gratitude to the author of the project Lesia Maruschak, Landskrona Fotо Festival and artistic director Monica Allende for all the efforts to make this exhibition real as well as a sincere interest in Ukrainian history and keeping a memory of the darkest its pages alive.”

UWC is a proud public relations sponsor of Project MARIA.

For more information on Lesia Maruschak and Project MARIA www.lesiamaruschak.com

Commemorating the Day of Remembrance of the Victims of Forced Resettlement in 1944-1951
All Posts
Support Ukrainian families in Lebanon!