The purpose of the UWC and UCCA Election Observation Missions is to support an open and transparent electoral process in Ukraine. The UWC and the UCCA support Ukraine’s commitment to international standards for free and fair elections, which reflect the will of the electorate and do not support any candidate, political party or a bloc.

The Central Elections Commission of Ukraine has accredited 26 official observers from the UWC and UCCA. On election day, the electoral process was monitored by official observers from six countries, namely, Canada, USA, Denmark, Switzerland, Great Britain and France. The UWC and UCCA missions observed the electoral process in Dnipropetrovsk, Donetsk, Kyiv, Chernihiv oblasts, and in the city of Kyiv.

The mission notes a number of positive legislative changes compared to the 2015 local elections. This is the first time when the suffrage by internally displaced persons (IDPs) and internal labour migrants has been adjusted for the purpose of local elections, as well as the innovative electronic services to change the electoral address, have been introduced. Almost 92,000 voters used this service and changed their voting address to participate in the local elections.

Another positive factor is the approach toward gender representation introduced in the Electoral Code of Ukraine during the formation of single and territorial electoral lists, provisioning the inclusion of at least two candidates of each gender in every consecutive set of five candidates.

It’s been the first time that Ukraine has adopted the legislative norms to fully ensure the voting rights of people with disabilities.

The UWC International Elections Mission was alarmed by the fact that despite Verkhovna Rada’s July announcement about the local elections taking place all over Ukraine except for the temporarily occupied territories no elections were held in 18 territorial communities of Luhansk and Donetsk oblasts.

In 2019, these 18 communities held both presidential and parliamentary elections. Now that a ceasefire had been declared the conditions for holding elections are likely to be more favourable than a year ago.

The Mission notices the imperfection of the legislation, which gives Civil-Military Administrations the right not to comply with the resolution of the Verkhovna Rada of Ukraine and to decide on the impossibility of holding local elections. Notably, Civil-Military Administrations have a conflict of interest with local communities over control of community funds. More than 500,000 voters were effectively robbed of their constitutional right to elect the government of local self-government bodies.

Since the launch of the electoral process, the UWC and UCCA International Election Observation Missions met with representatives of key government bodies that were responsible for facilitating various aspects of the election: CEC leadership, the Ministry of Interior, the National Police, the Ministry of Health, the Ministry of Foreign Affairs, and respective representatives of the Verkhovna Rada of Ukraine. The UWC and UCCA observation missions also worked closely with international missions, including the OSCE, expert NGOs such as the Committee of Voters of Ukraine and OPORA, and a number of other NGOs and think tanks. In addition, meetings were held with the Hierarchs of Ukrainian Churches.

The Mission notes that any direct interference in Ukraine’s internal affairs by foreign states is absolutely unacceptable. This includes campaigning for a political party during Hungarian State Secretary Janos Arpad Potapy’s visit to Transcarpathian region and the call of Hungarian Foreign Minister Péter Szijjártó addressing Hungarians of Transcarpathian region to support party KMKSZ – Hungarian Party in Ukraine in the local elections on 25 October 2020.

On the eve and during the election day official observers noted the following violations and difficulties at selected polling stations:

–      delays in opening some polling stations;

–      lack of ballot boxes, in one case one of the two mobile ballot boxes could not be sealed;

–      voting of people with disabilities in the wheelchairs outside the booths;

–      problems with the lists, the absence in the lists of people who were discharged on the eve of election day;

–      difficult access of elderly people and people with disabilities to certain polling stations,

These violations were not systemic and generally did not affect the election results. These preliminary conclusions are submitted before the counting of votes is completed and the preliminary and final results of the elections are announced, and possible complaints and appeals are considered.

“These elections were different from other elections in the history of Ukraine because of the challenges associated with the pandemic and the expanded powers of local government bodies to address local issues,” emphasized Andrew Futey, Head of UCCA Election Observation Mission.

“In fact, Russia’s hybrid military aggression against Ukraine had the largest negative impact on the 2020 local elections in Ukraine, as it did not allow the Ukrainian people to elect local governments in Crimea and in the occupied territories of Donbas,” noted Head of UWC Election Observation Mission Borys Wrzesnewskyj. “The UWC and UCCA missions continue their work, expecting to submit a detailed report from both missions after the elections with specific recommendations for improving the electoral processes,” he said. 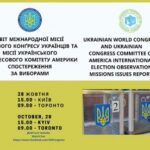 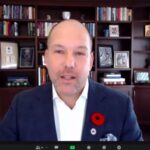