The Ukrainian World Congress (UWC) together with the multi-million strong Ukrainian diaspora joins Crimean Tatars around the world in commemorating the anniversary of the deportation of the Crimean Tatar population from Crimea and remembering the many victims of this genocide committed by the Soviet Union.

The deportation of Crimean Tatars, carried out 77 years ago on the order of the bloodthirsty Soviet dictator Joseph Stalin, became one of the most horrific crimes of the Soviet regime. Up to 40% of the total population of Crimean Tatars died in a result of this deliberate act of hatred, while the rest were forced to live in harsh exile conditions up until the late 1980s, humiliated and labeled by the Soviet authorities as a “nation of traitors”. The return to Crimea became possible only after the collapse of the Soviet Union and the restoration of Ukraine’s independence.

In 2014, Russian Federation invaded and illegally occupied Crimea, bringing back terror, intimidation, persecution of members of the Crimean Tatar and Ukrainian communities for political reasons and on the grounds of nationality and religion. On the basis of fabricated accusations, the activities of the Mejlis of the Crimean Tatar people were banned and centers of cultural and religious life, along with independent mass media, were closed.  At present, over 100 Ukrainian political prisoners are illegally detained in Crimea and in other regions of Russia.

Today, like in 1944, Moscow continues to grossly violate international rule of law and human rights for the sake of realizing its imperialist geopolitical plans that pose a serious threat to peace and security throughout the entire world.

The Ukrainian World Congress calls upon governments and international organizations to recognize the deportation of the Crimean Tatar people as genocide. We also call upon the international community to intensify the pressure on Russia, including through heightened sanctions and support to Crimean platform initiative, to accelerate the de-occupation of Crimea and release of political prisoners. 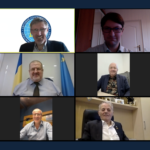