August 22nd, on the eve of Ukraine’s independence day celebrations, the statue “Bitter Memory of Childhood” at the Holodomor memorial in Kyiv was desecrated. The statue of a young starving girl holding several stalks of grain is an internationally recognized symbol for one of the most tragic pages in Ukraine’s history. Ukrainian communities have erected replicas of this statue in many countries around the world, paying tribute to millions of innocent Holodomor victims and their descendants. These memorials are sacred places of mourning and remembrance for every Ukrainian.

The Ukrainian World Congress (UWC) condemns this act of vandalism as a denigration of the memory of the Ukrainian people. UWC has called upon the Ministry of Internal Affairs of Ukraine, to bring the perpetrators of this action to justice and ensuring appropriate security for the Memorial.

In a letter to the President of Ukraine and other senior government officials, the UWC called upon him to publicly condemn this act as a crime against the nation; to launch an immediate investigation into this case; and assume Presidential responsibility for the security of the Memorial.

“We have been witnessing a global and coordinated anti-Ukrainian operation, including vandalism of memorials and disinformation campaigns that distort and falsify the truth about Ukraine’s history. It includes the desecration of the Holodomor memorial in Kyiv, vandalism at a Ukrainian cemetery in Toronto, defacing the future Communism victims memorial in Ottawa, among others. Kremlin propaganda is attempting to rewrite the history of our people, erase the memory of millions of Ukrainian victims of the totalitarian regime, turn our allies against us, and sow discord in our global communities.” – stated Paul Grod, UWC President. “I call upon all Ukrainians and friends of Ukraine around the world to stand up to these anti-Ukrainian provocations and Russia’s global disinformation campaign. Truth is on our side.” 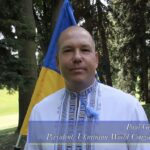