Unity Day is one of the most important dates in the history of Ukrainian nation building. On January 22, 1918, for the first time in the XX century Ukrainian independence was proclaimed with the IV Universal of the Central Council and one year later, January 22, 1919, on St. Sofia Square in Kyiv, the Unification Act was officially proclaimed, resolutely declaring: “Henceforth the lands of a sole Ukraine divided for centuries are merging into one –   Western Ukrainian People’s Republic (Halychyna, Bukovyna and Transcarpathia) and Naddniprianschyna. The long lasting dreams, for which the greatest sons of Ukraine lived and died, have been realized. From today there is one independent Ukrainian People’s Republic.”

Today, with the territories of Crimea and Donbas remaining under Russian occupation for over five years now, and the continuation of armed aggression on Ukraine’s eastern border, Unity has particular significance for every Ukrainian. We all, as never before, understand the importance of the spiritual-religious and national unity of the Ukrainian people as the foundation of countering foreign aggression for the expedient restoration of Ukraine’s territorial integrity.

On Ukraine’s Unity Day, the UWC pays tribute to all those who have fought for a sole and indivisible Ukraine and to today’s brave defenders who are prepared to lay down their lives in defending the state borders of Ukraine.

“Today’s challenges, just as more than 100 years ago, require the Ukrainian people to remain united  in protecting the sovereignty of Ukraine and countering Russian aggression. The Ukrainian World Congress appeals to the international community to continue its consistent support for the Ukrainian state in the defence of its territorial integrity, independence and sovereignty,” stated UWC President Paul Grod. 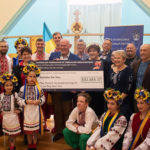