On November 27, 2020, the Ukrainian World Congress called on Ukrainian communities around the world to light candles of remembrance to honour the victims of the Holodomor genocide of 1932-33. Of significance this year was the announcement of a new project of the UWC: The International Network of Holodomor Victims.

The virtual event was attended by the President of UWC, Paul Grod; the Chair of the International Coordinating Committee for Holodomor Awareness and Recognition, Stefan Romaniv; His Beatitude Sviatoslav, Head of the Ukrainian Greek Catholic Church (UGCC); His Beatitude Epiphanius, Primate of the Orthodox Church of Ukraine (OCU); and Olga Soroka, Head of the International Network of Holodomor Victims.

“We, the descendants, know the truth. We have heard our families talk about their suffering during the Holodomor, and we are obliged to pass this story on to future generations to unite those blood relatives of Holodomor survivors,” said the head of the International Network of Holodomor Victims, Olga Soroka.

Stefan Romaniv, Chair of the International Coordinating Committee for Holodomor Awareness and Recognition, spoke about the actions and initiatives of the Ukrainian World Congress in partnership with various other organizations. In particular, he spoke about the petition currently collecting signatures to include the word “Holodomor” in the English dictionary. You can sign the petition by following the link.

On November 28, 2020, UWC mission to Ukraine joined the Holodomor commemoration in Kyiv. Solemn Prayer of the Orthodox Church of Ukraine and the Ukrainian Greek-Catholic Church Heads in Kyiv, near the National Museum of the Holodomor-Genocide was also attended by the Ambassador of Canada to Ukraine Larisa Galadze, UWC Vice President Lenna Koszarny and the President of the American Chamber of Commerce in Ukraine Andy Hunder. We thank Ukrainians from all over the world who have joined and continue to join the global “Light a Candle” campaign. 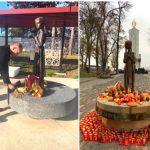 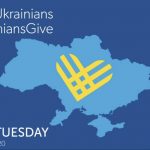