The Ukrainian World Congress (UWC) proudly supports the international fundraising campaign launched by the International Charitable Foundation for the Development of the Holodomor Victims Memorial in partnership with the Canada-Ukraine Foundation (CUF) with the goal of raising funds for the permanent exposition and an endowment fund for the second phase of the National Museum of the  Holodomor-Genocide in Kyiv, Ukraine.

The National Museum of the Holodomor-Genocide is being built on a public-private partnership basis as phase two of the existing memorial to the victims of the Holodomor in Kyiv on the banks of the Dnipro River. The Government of Ukraine is responsible for the construction of the building, while the interior of the museum, including the main permanent exposition and endowment fund, are the responsibility of the International Charitable Foundation for the Development of the Holodomor Victims’ Memorial. The permanent exposition will be designed jointly by world renowned museum design firms Haley Sharpe Design and Nizio Design International.

The multi-million dollar project will be presented publicly for the first time during an invitation only National Holodomor Museum Special Event in Kyiv on November 19, 2019, hosted by the Supervisory Board of the International Charitable Foundation for the Development of the Holodomor Victims’ Memorial chaired by Ivan Vasiunyk, Vice Prime Minister of Ukraine (2007-2010). The event will bring together friends of the Museum Project, including government representatives and top management of large Ukrainian and international companies.

“CUF is pleased to join the International Charitable Foundation for the Development of the Holodomor Victims’ Memorial in spearheading the fundraising campaign for this significant international project,” stated Bob Onyschuk, CUF Chair (2007-2013). “CUF has a solid track record of funding and implementing major projects that continue to make an impact on the lives of the Ukrainian people and the Holodomor Museum is yet another example of an initiative that will be a legacy of the global Ukrainian community in further strengthening the Ukrainian identity.”

“As a founding partner of the project, the Ukrainian World Congress is proud to support the development of phase two of the Holodomor Museum in Kyiv and the fundraising initiative of the Canada-Ukraine Foundation,” stated UWC Vice President and Chair of the International Holodomor Awareness and Recognition Committee Stefan Romaniw. “The joint Ukrainian and international expertise being harnessed will produce a world class Holodomor Museum that will educate and sensitize visitors from around the world to the story of this genocide of the Ukrainian people.” 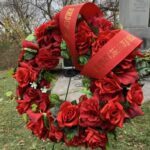 Lest we forget!
All Posts
Remembering the Day of Dignity and Freedom