On August 25, the UWC leadership met with the Prime Minister of Ukraine Denys Shmyhal. The parties discussed the implementation of the Memorandum on cooperation between the Cabinet of Ministers of Ukraine and the UWC, as well as some of the next steps to increase cooperation.

The discussion focused on European and Euroatlantic integration of Ukraine, maintaining the current path of reforms and diaspora’s support of key areas of the country’s transformation. The issues of improving business climate and attracting investment to Ukraine were also raised during the meeting. The UWC also stressed on the importance of establishing a special interdepartmental (consultative and advisory) body on external migration in the structure of the Cabinet of Ministers of Ukraine, which could well improve Ukraine’s migration policy and the situation with Ukrainian labour migrants.

The implementation of the Holodomor memorial and museum in Kyiv was also high in the agenda. The UWC leadership thanked for the Ukrainian government’s efforts aimed at completion of the museum and memorial construction. At the same time, the UWC also stressed on the importance of constructing other Ukrainian state museums of global importance, such as the National Museum of the Revolution of Dignity and the Babyn Yar National Memorial.

Prime Minister of Ukraine Denys Shmyhal thanked the UWC for its pro-active approach towards the development of Ukraine and stated that the government of Ukraine stood ready to expand cooperation at the global level. 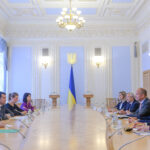 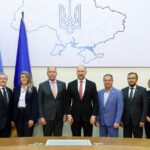