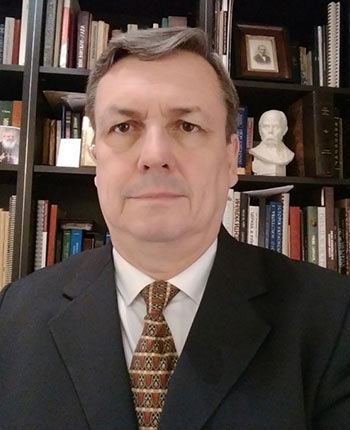 President of the Board of Directors Ukrainian Cultural Society “PROSVITA” in the Argentine Republic.

Community activist, member of “Plast” (Ukrainian scouts) in Argentina. In 1984, he joined the Ukrainian Information and Publishing Institute where he collaborated in publishing the Spanish language magazine “Ukrainian Word” and organizing a series of public events. From the beginning of the 1980’s he became a board member of the Ukrainian Cultural Society “Prosvita”, and since 1995 he has been elected President three times (1995-1999 / 2016-2018 / 2018-2020) to carry out the duties until today. In two occasions (2007-2008 and 2010-2014) he became the Chairman of the Main Council of the Ukrainian Central Representation in Argentina and the Secretary of the Executive in 2008-2010.

In November 2018 he took part in the Observatory of Foreign Communities, within the Directorate of Pluralism and Multiculturalism under the National Secretary of Human Rights and Cultural Pluralism of Argentina.

He was awarded the Honorary Award, III Degree of the Ministry of Foreign Affairs of Ukraine (2006) and the Order of Merit III class by the Decree of the President of Ukraine from 2008.

Born in 1956, Architect by profession, he is married to Lida Markowicz and has a son Taras and a daughter Sofia.