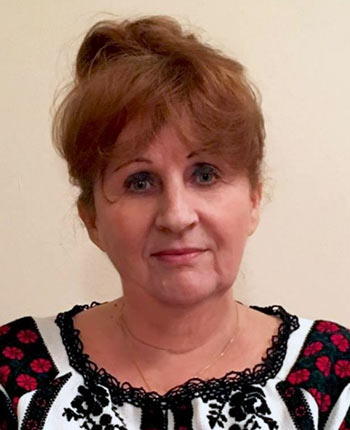 Jaroszlava Hartyanyi (Jaroszlava Huk). Citizen of Hungary, born on June 6, 1958 in the village of Vovkivtsi, Ternopil oblast. She graduated from Terbovlya Higher School of Culture in 1976.

In 1978, she married a Hungarian named Nandora Hartyanyi. She has lived in Budapest, Hungary since 1979. They have one daughter, Nicoletta, who was born in 1980. In 1987, she graduated from the Faculty of History at the Eötvös Loránd University, Budapest.  She worked as a teacher at Puskás Tivadar Vocational High School from 1983-1985 and at Clara Luway School from 1985-2018.

She is also the author of numerous publications including: “Hidden Truth” – a documentary about the Holodomor in Ukraine from 1932-33. She was the editor and compiler of the book, “In Memory of Innocent Victims” (international conference on the Holodomor in Ukraine from 1932-33). She is the author of numerous historical publications in Hungarian and Ukrainian journals.