January 10, 2022 – The Ukrainian World Congress (UWC) is calling on the international community to stop Putin’s war on Ukraine.  Please join our campaign – #SayNOtoPutin.

Today, Russian President Putin is more emboldened than ever before and has demonstrated his intentions to further invade and destabilize Ukraine – action is needed now!  The people of Ukraine, Belarus, Kazakhstan, Georgia, Moldova, Poland, Estonia, Latvia and Lithuania and others are facing serious threats to their national security and sovereignty.

“Putin’s playbook is well known – appeasement will only embolden him,” stated Paul Grod, UWC President.  “His imperialistic ambitions are not limited to Russia’s neighborhood as he continues to destabilize democracies around the world.”

The Kremlin’s tactics for rebuilding its empire include:

The EuroAtlantic community must end its strategy of appeasement.  We call upon the United States and the international community to begin rolling out punishing sanctions and provide strong military and security support to Ukraine – NOW!

We call upon the international community to:

On January 22, 2022, the Ukrainian World Congress is calling for a global rally to “Stop Putin NOW!”  It is being held on the Day of Unity of Ukraine, marking its independence and unification in 1919.

Here’s how you can join the global action:

We need you to act now!

The UWC Human Rights Committee Meets with Mejlis Leadership May 17, 2021

The 88th anniversary of the Holodomor genocide is approaching. Calendar of Commemorations November 12, 2021 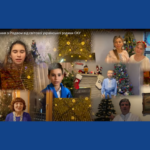 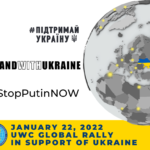